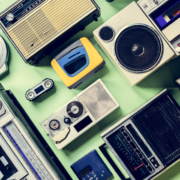 There hasn’t been much opportunity over the last 18 months to discover new stations by dialing around on a road trip. But a few weeks ago, I was in Southern New England. When I hit seek again, I knew I wanted to stop on the station that played “Got a Hold on Me” by Christine McVie. I knew I would like the station that followed that song with “Giving You the Benefit” by Pebbles.

Over the course of the next 18 hours, I heard WOON (O-N Radio) Woonsocket, R.I., play a lot of deeper ‘70s (literally — one of them was “Deeper Than the Night” by Olivia Newton-John). I also heard “Pushing Too Hard” by the Seeds, and other similar mid-level hits from the mid-‘60s. I heard pre-Beatles. I heard a great Cowsills song I didn’t know, “All My Days,” staged as an “O-N Special.” I heard a couple of TV themes and movie songs, including one of the nuns’ songs from Sister Act and “UHF” by Weird Al Yankovic.

You’ll hear plenty of songs on O-N like the Supremes’ “Love Child” or Paul Simon’s “Mother and Child Reunion,” big hits that were readily available on the radio for years, but are less so now that the ‘60s and early ‘70s are less available on broadcast radio. But the song that just followed Simon was “I Just Want to Dance With You” by George Strait. And on the first day of my O-N listening, I heard it play Simon’s “Run That Body Down” from the same album. Now it’s playing “All the Way to Reno” by R.E.M.

Longtime readers know that “oldies stations beyond the safelist” are a staple of this column. Many ROR readers program those stations, either on the air or online, including a few that are programmed by personal friends. I’m always afraid to write a story on stations like that because I’ll leave somebody out. I do want to mention the July 4 weekend programming on Pop Gold Radio, which counted down WRKO Boston’s all-time Top 68, and Big8Radio.com, which created a never-before assembled Top 100 of 1969 based on the surveys of CKLW Detroit.

I’ve found stations that fill this need in Classic Rock, Classic Country, and Classic R&B as well. (I have a friend in Nashville who now texts on a weekly basis to tell me what R&B oldies WVOL Nashville is playing, especially on those occasions when it plays something that goes beyond R&B oldies.)

In my role as a researcher and consultant to radio stations, I respect and am happy to facilitate those stations that want to play 220 immaculately testing Classic Hits titles. I’m even happier when a PD wants to color that in a little. I have reached the point where I don’t need to hear “Livin’ on a Prayer,” but I want to help you hear it, and make sure you get it from broadcast radio, not somewhere else. And I’m very happy to report that I’m starting to hear “Bad Medicine” by Bon Jovi on well-executed, well-researched radio stations a little more often.

Stations beyond the safelist used to be the kind that you would only stumble across on a radio road trip. Then streaming made them easier to find. The proliferation of FM translators also meant that the fourth satellite sports station in the market might be willing to try music again. There’s always something to listen to when I’m working and just can’t listen to “Adore You” by Harry Styles on an AC station again. Still, every new WOON is a boon.

WOON got me thinking about what to call this genre of oldies station. There are degrees by which stations diverge from the safelist. Many, such as KAZG Phoenix or the True Oldies Channel, specialize in the big ‘60s or ‘70s songs that were part of the format’s safelist of 15-20 years ago, before the ‘80s became the center of the format. WMTR Morristown, N.J., bills itself as “Classic Oldies,” and I think that’s a pretty good name for that flank of the format, differentiating those stations from “Classic Hits.”

But there are also stations like WOON that represent another level of depth — the span from pre-Beatles to early ‘90s; the presence of the movie themes or collectors’ songs and other things that were never on the safelist to begin with. I have dubbed this wing of the format “Oldies XL.” The SiriusXM decades channels certainly have the depth, but they do not, by design, have the same breadth.

The break between the various groups of stations is never clean. I certainly hear songs that surprise me on WMTR or Scott Shannon’s spikes on True Oldies Channel from time to time. There are a growing number of stations programming some mix of ‘60s oldies and ‘70s pop. Those stations are another model unto themselves, and some, such as KDRI (the Drive) Tucson, Ariz., are happy to be unclassifiable.

No two Oldies XL stations sound the same; they’re usually programmed by people with very strong feelings about music. What they have in common, to paraphrase the mantra of the wide-variety Adult Hits format, is being a mile wide but at least a little more than an inch deep.

Oldies XL stations usually have a mission that doesn’t depend on winning in rated markets. WOON is a full-service community radio station. That it plays “Money, Money, Money” by Abba is a bonus. But “ratings winner” has been coming in a lot of different shapes and sizes lately, as evidenced by WAKY Louisville, Ky. (which is at least in the “Classic Oldies” camp), leading the market with a 6.8 share 12-plus.

I’ve always felt that Oldies stations with unique formats tend to overperform in streaming — sometimes too much. WAKY is currently geofenced. WMTR stopped streaming for a while, a victim of its own success, then returned by popular demand. Recognizing the worldwide sales potential of such a format isn’t a priority for every niche oldies operator, but I nevertheless believe that potential exists, even for a station like WOON with a small-market community mission.

Here’s a recent sample of WOON in middays:

Queen, “Another One Bites the Dust”

Eric Carmen, “She Did It”

Beatles, “Fool on the Hill”

Frankie Valli, “I Make a Fool of Myself”