What do radio listeners want during the workday now? Do they want continuity? Do they want the morning show they’re not hearing anymore in the car on the way to work?

I’ve been wondering for a few months now how the audience of the AC radio station I schedule is hearing the things I do. Playing a power at 9 a.m. Tuesday and 3:30 p.m. on Wednesday would have been OK before on this station. Now, I wonder if any repetition on two consecutive workdays makes the “Groundhog Day” syndrome worse. Is “Every Breath You Take” becoming “I Got You Babe”? At the same time, I’ve also wondered which basic tenets of scheduling still matter. What’s AM/PM drive protection if there is, effectively, no AM or PM drive commute for so many people? I’ve never known for sure if listeners notice the same song in the 3 p.m. hour on consecutive Wednesdays, but it seemed like a reasonable thing to avoid when possible. But now listeners aren’t even sure if today is Wednesday.

I’ve also noticed the success in the U.S. of some stations that wouldn’t have been big winners in the metered listening measurement era before. Whether it’s the Classical stations in Washington, D.C., and Seattle, or the Classic Country station in Cincinnati, or the ongoing success of Contemporary Christian KLTY Dallas, formats programmed for long stretches of Time Spent Listening, something which has been against PPM law for the last decade.

While I’ve been wondering if my station needs a little more variety, some U.S. broadcasters have made a more dramatic change. Almost from the beginning of the pandemic, stations have been extending their morning shows past 10 a.m. The changes have been spurred by the clearly reduced morning usage in a world without commutes, and by a stated desire to provide comforting, familiar voices when listeners need them.

But the changes have likely been driven by other factors as well. As broadcasters have scrambled both logistically and with budget issues, it’s natural to want to move the morning show until 11 a.m. or Noon. Finding them a place is probably going to take precedent over a midday show that may have already been voice-tracked anyway.

A few weeks into the pandemic, I heard a well-known CHR that was suddenly jockless in middays and it sounded wrong, just one more eerie disruption of normalcy. But I heard another CHR where the morning team was on at 11 a.m., and trying to fill time with boilerplate topics of the “does pineapple belong on pizza?” variety. When April and May ratings came out, neither station did well. 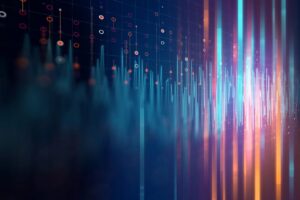 Two weeks ago, the “morning show until Noon” strategy got a further boost after the widely reported Edison Research finding that the average day of audio use that had begun at 7:15 a.m. pre-COVID was now starting at 8:30 a.m. Some broadcasters are interpreting this as “morning drive starts later. Stand by for the 10:30 phony phone call.” I’m thinking it means “morning drive is on hold for now.”

Part of that is the relative stability of midday listening for adult-leaning formats. In the course of trying to parse what listeners wanted from middays on my AC station, and others, I asked Nielsen’s audience insights director Jon Miller to analyze the usage of 20 stations in a variety of adult formats—Country, Classic Hits, Adult Contemporary, Soft AC, Adult R&B, Classic Rock.

While those formats had been affected by lower cumes, like all others, Miller found that the number and duration of occasions for these formats had remained mostly unchanged since the pandemic for those listeners that remained. In addition, the spike in listening levels around 7-9 a.m. and 3-5 p.m. were gone, leaving daytime listening as more of a bell curve, peaking around Noon. 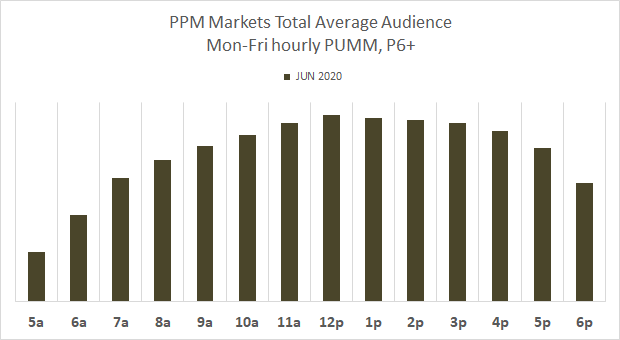 Some broadcasters have interpreted the Edison data as suggesting that daily routines, including wanting to hear your favourite morning team, are just being shifted later. But with morning radio having been so dependent on in-car listening, and so fragmented elsewhere by everything from phone alarms to greater competition with TV, I wonder if listeners are just skipping ahead to the second phase of their audio usage, the at-work piece. And if that’s so, do they want that content to change? 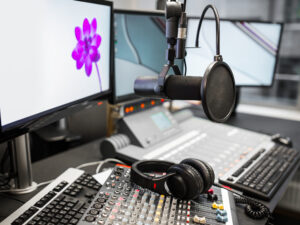 That brings me back to the scheduling questions. In North America, consultants and programmers tell me that they’re not making a lot of changes in their rules or overall scheduling philosophy. They’re trying to provide continuity. As one consultant noted, continuity is the thing that radio can offer listeners now. To be fair, I’ve spoken to analysts and programmers I respect who think the all-morning morning show makes sense. But others see it as disrupting the one usage people are happy with.

It is also worth noting here that European radio is seeing sharper climbs in TSL. Powergold’s Steve Silby notes that programmers are indeed scheduling for longer listening stretches, not necessarily by slowing down powers, but by better managing the level of variety below them. Red-FM Athens PD Christos Papadas hasn’t made any major changes, but he was already scheduling for long listening spans. It’s also significant that European workday listeners are more used to hearing news during the day—even when we’re not in a time of crisis—and more personality, just not a breakfast show.

Given the number of unhosted shifts on radio at a time when listeners need companionship, one option might be to reassign morning team members for now to make sure as many shifts are hosted as possible. If we want to reach listeners when they’re available, without disrupting midday usage, one option might be having one member host mornings, one host middays, and having them do an hour of crossover together at, say, 8:30-9:30 a.m.

As for at-work radio, maybe it needs to remain at-work radio, regardless of where at-work is. Maybe morning shows, rather than diffusing that usage for two hours, need to create new morning listening habits because in-car usage may never be the same, even post pandemic. The challenges in doing so are well documented, particularly at a time when marketing is difficult. But morning teams have advantages in being established, comforting presences, and radio has an advantage in local information. It is possible that listeners don’t want those things before 8:30, I suppose. But maybe they just haven’t been asked lately.

Those Who Try Powergold Get It
Powergold users across the world rate us #1 in the industry for our ease of use, control of music flow, radio experience, and support and training. It’s time to discover Powergold and all the great things you’ve been missing.